The volunteer salesperson heard me exclaim over a very reasonably-priced doll's house in the charity shop. She was with me in an instant.

"Go on, you know you want it!"
"We're going to see my granddaughter in Italy. She'd love it."
"There we are then"
"But Husband will have a fit if I go home with this and say we've got to get it in the car."
"It comes apart."
"Does it?"
We both stare at it as if expecting it to separate into its constituent parts.
"Yes, I'm sure it does. You've got to take it. She'll love you for it."
I bite my lips and see another woman eyeing it up.
"Okay, I'll take it! You're sure it comes apart?"
"Yes. I expect so."

And what do you know? It did. (After a bit of muttering and grumbling about sales persons.) 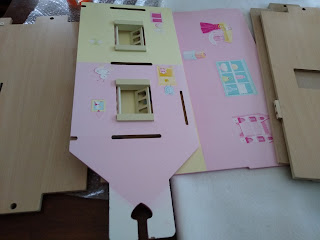 We had what was probably our last barbecue of the year yesterday. It wasn't the best of weather - intermittent showers - but we stuck it out, although the children wisely played indoors. 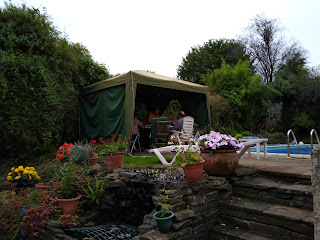 Husband suggested we had brisket so I slow-cooked it in a barbecue sauce and then he finished it off on the barbecue. It was nice but not as good as Elder Son's version.

For pudding we  had crumble made with rhubarb, apples and raspberries from the garden. 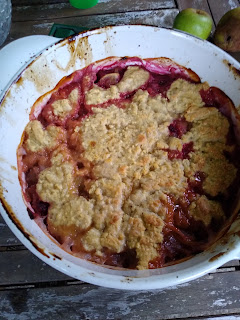 For a large part of the early afternoon a helicopter hovered around the area and in particular over our garden. It was suggested they were spying on me after my rants about the Prince of Wales. 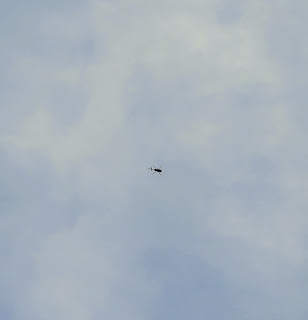 Having been called both disrespectful and racist in the last few days I thought I'd do a bit of digging and find out some more about the history of the princes of Wales.

This is the story I recall from school days. It is possibly apocryphal.

In 1284 Eleanor, wife of Edward I, gave birth to a son in Caernarfon Castle. Following that Edward invited several powerful Welsh leaders to the castle for a feast. After wining and dining them he asked if they would be happy to serve a prince who spoke not a word of English. Assuming he meant one of them or their clansmen they agreed.

The cunning Edward then introduced his baby son as the new Prince of Wales, and having given their word the Welsh lords were obliged to accept him.

Since then the title Prince of Wales has been given traditionally to the English monarch's eldest son but it's an appointment not a birth right.

Before this there had been a number of Welsh princes although their rule was largely over individual princedoms within Wales, although Llywelyn ap Gruffydd, ‘Llywelyn the Last’, was officially recognised as the Prince of Wales by King Henry III in 1267.

His good fortune was not to last. He joined the Barons' revolt against the next king, which led to Llywelyn the Last being declared a rebel by Edward I who gathered an enormous army to march against him.

He was eventually killed in 1282 and was succeeded by his brother, Dafydd ap Gruffydd, who was soon condemned to death for high treason against the king. Dafydd would be first prominent person in recorded history to be hanged, drawn and quartered. The last independent Welsh kingdom fell and the English gained control of the country, control they retain to this day. Leading us back to Edward and Eleanor's baby son and the continuing practice of appointing English Princes of Wales.

Actually thinking about it I wonder if my great-great-grandfather had this story in mind when he made a bet with some customers in his pub.

Mumbles at the time was a big yachting centre and during one regatta a Turkish Pasha had been staying in the village. Some of the pub customers must have said that he'd left and my great-great-grandfather argued with them and bet them that Pasha was not only still in Mumbles but in the pub itself. The bet was taken and my great-great-grandfather went upstairs to return moments later with his new born son, who forever had to live with the name Hobart Pasha. 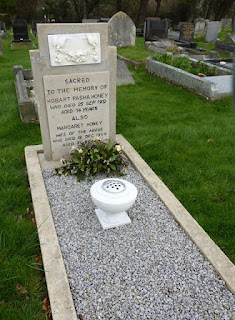 Lovely walk this afternoon with Elder Son, GrandSon1 and Toby Dog. It was surprisingly warm! 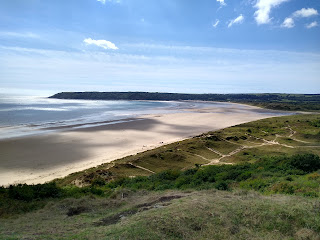 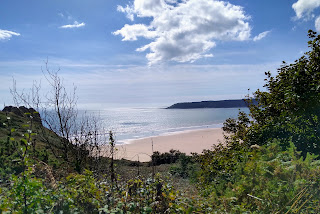 Then I came home and picked most of the remaining rhubarb and my solitary squash. 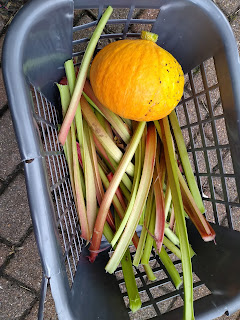 I have frozen three bags of rhubarb, put some on to stew, and I'm going to make a crumble with the rest tomorrow. A very large crumble.
Now I'm going to email Mark Drakeford, head of the Welsh assembly to ask him what Charles, Prince of Wales ever did for us.

The English Prince of Wales

King Charles addressed the nation this evening. I listened in the car as I was en route to Daughter's. Thankfully I had parked and was just sitting and listening by the time he got to the '. . . and I hand over my title of Prince of Wales to William.'

I was called disrespectful on Facebook for saying I didn't want another English Prince of Wales. I wonder if those people who accused me will be calling the King disrespectful for bringing it up. I doubt it.

If we're to have another English Prince of Wales he had better come and live in Wales, send his children to school here, use Welsh services, promote Wales, attract tourists. Do something to earn the respect of the Welsh on whom he is being foisted.

I have nothing against Prince William. I'm sure he will one day be a fine king. I just don't want him as Prince of Wales.

God save the King

While I am ambivalent about the monarchy I know that the Queen believed it was her duty to serve and she did that faithfully for over seventy years, without scandal or indiscretion. I very much doubt we'll see her like again.

But I am quite glad we will be away for most of the next few weeks.

I switched on the radio in the car today and heard my first rendition of God Save the King. It will be strange. It has been God Save the Queen for the whole of my lifetime,

And I have already signed a petition saying a new prince of Wales should not be appointed. We've had an English Prince of Wales for too long. No more.
Posted by Liz Hinds at 2:42 pm 7 comments:

Have just come back from having a wart on my leg frozen. Fairly painless procedure but it doesn't look pretty now.

Turned out the doctor was the nephew of one of my best friends in senior school. The surname, Snelling, was a bit of a give-away: there can't be that many in the area. Now all I have to do is remember if he said to put a plaster on it or not.

I also picked up the food from the Diner for Zac's. This week it was sausages in gravy and veg. Result: gravy all over the boot of the car. Previously I'd have brought the piece of floor covering in and let George lick it clean. And he'd have done a better job than I did washing it.

By the way, has anyone read Mrs Dalloway by Virginia Woolf?

One ordered it from the library on a whim because one thought it was the sort of book one should have read - the sort of book that would use one over you or I. I began it last night and I may have been tired but it didn't seem to make an awful lot of sense. Rather a lot of waffle that may or may not prove to be relevant.

Should one continue? I'm on page 23 and she still hasn't bought the flowers she went out to buy on page 1.

Nuora (Daughter-in-law) in Italy has done several outdoor markets this summer selling her unique and brightly-coloured clothes but the special guests at last Sunday's event were a little freaky. 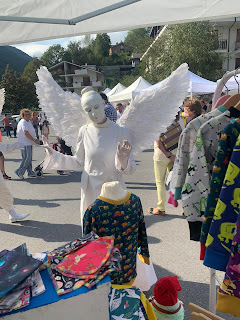 My first thought was Weeping Angels but I guess they don't have Doctor Who in Italy or the children would have been traumatised. 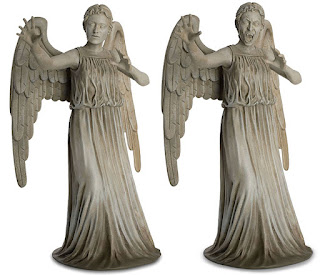 You have to keep your eyes on them: they creep up when you're not looking and attack you.

On #NationalReadABookDay this is the book I am reading. 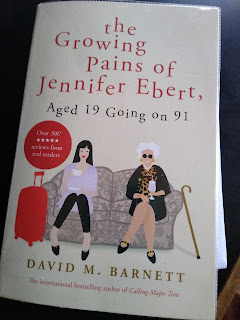 It's okay. Currently a 3* but there might be an interesting twist to come and raise it a bit.

Also managed to pick up The Man Who Died Twice by Richard Osman for £1 in a charity shop.

Back in 2019 I told you part of George's story. You can read it again here.

I haven't managed to go through all the photos yet. One day.

But Facebook thinks it's George's birthday today (it's not actually until 20th and we'll be away then) so here are just two photos. 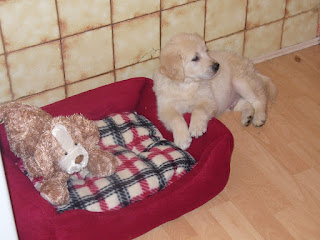 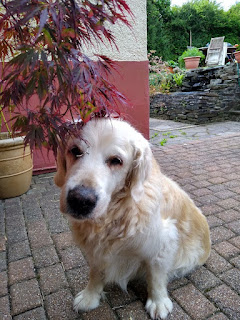