I worked out how to use this. 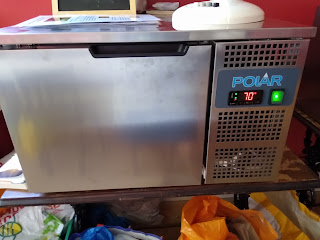 It's a cooler and gets trays of chilli down to a temperature suitable for the fridge. And when I say I worked it out, what I mean is I followed the instructions Stu left for me. 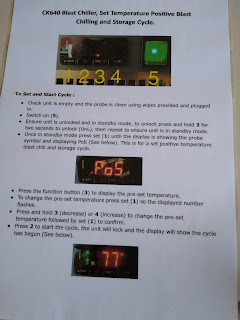 And even then it took me several attempts. But I did it.
Things of note regarding Zac's mini bible study on the beach yesterday. It was a glorious warm evening, and there were lots of people making the most of the sunshine.
Sitting on the steps from the prom we found ourselves in the middle of a screaming match between two women (with a child) on the beach and two men on the prom. The "f***"s were flying around. It was all very classy. I couldn't help thinking, "You don't get this in the south of France."
Sean asked me if I were ready to do my talky bit and I said, "I just need to get some sand." I tottered down the steps - their length and depth are not a natural fit for my stride - collected some sand, my visual aid, in my cup, and then noticed a load of paper beakers that had been discarded. I veered off and began to collect them before glancing up to see Sean and everyone else watching me. "Is this what you call fetching sand?" Sean laughed.
"Sorry I got distracted." Then I got distracted again and told them about the audiologist asking if distraction were a new thing for me. (Obviously it's not.)
During my talky bit two passers-by stopped and listened a while. Not for long but one of them did stretch out his arms and say, "He made all this." (I was talking about the wonder of the universe at the time so it wasn't totally unconnected which is more what I am used to in Zac's.)
Finally, earlier in the day, one of our regulars phoned me and asked if we were on the beach tonight and who was speaking. I said we were and I was. "Huer," he said, "and who's speaking next week?"
He didn't join us on the beach. Not quite as bad as last week when he turned up, asked who was leading, and promptly drove away again.
By the way, this is why we're currently not meeting in Zac's. 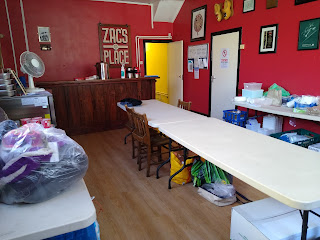 The room is still being used for the provision of food and clothes for rough sleepers and those in temporary accommodation.

I'll pray for your non-fan that he'll see the light and start attending YOUR talks!

Your comment about the South of France amused this one time France dweller! The f word is just as common in angry talk there, and yes, it starts with f,too! same origin.

And I expect every preacher including the greats has had people drive away, or trot away on their donkeys and camels! You're in good company.

Oh! Blast chillers let you make, cool, and decorate cakes a lot faster too!!!! We see a lot of baking contestants use them that way on HGTV.

Last summer I attended a spiritual event in a park, and I noticed several walkers listening to the speakers as they went by. One never knows where the message will find paydirt.