followed by a less than perfect night.

An early evening swim off the prom at high tide 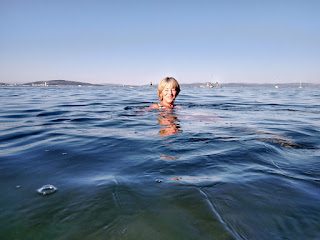 followed by cockles and chips. 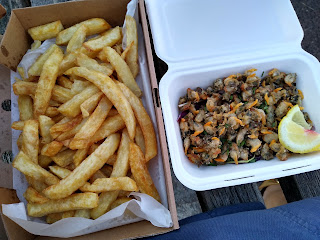 Then at about 9 George had a bad seizure. The rectal diazepam didn't work as well as usual. And then he barked until gone midnight. He definitely lost the sympathy vote with that.
This morning he had another bad seizure. It is so horrible when he is in one. Husband and I agreed we couldn't let him go on like this. But then he was okay for the rest of the morning.
We took him to the vet half-expecting her to say that it was time but she is trying some other medication to try and get the seizures back under control. As she said, "It's a tough case as his organs are all healthy and in between seizures he's quite happy."
So a reprieve for now.

Oh my. I hope George stabilizes for a bit longer! I can only imagine how you feel.

Oh no! It's so hard to know what to do in a situation like this.

Seizure disorder is so hard to cope with. I've dealt with it in a partner as well as in dogs.

Even when the patient is fine between seizures, it's disabling because of what they can't safely do, such as swim.

And in the case of a partner, drive, work in a lab, etc. Doctors usually try greater and greater efforts to control seizures because there's so little we know about the causes, all we can do, often, is manage the symptoms.

I am hopeful that a change in medicine will do wonders for George.