To make up for their Big Bloomer boo-boo FaceBook is now targeting me with ads telling me, 'It's not you; it's your hormones.'

Apparently it's not eating too much or not getting enough exercise that has resulted in my blobby belly: it's an imbalance of hormones. No doubt if I paid the man a lot of money he would tell him how to correct that but maybe I should stop the sneaky chocolate and ice creams first.

And get more exercise. If you can count walking George as exercise.

As Husband was painting this morning I walked George alone. I had intended to do the beach walk but as we set off the sun came out and the river seemed a better option as it could have been too hot for George. It's a path we haven't taken for a long time because Husband doesn't like muddy paths, but I figured it had been dry enough recently for it to be okay. Even for someone inappropriately shod: I was wearing sandals. 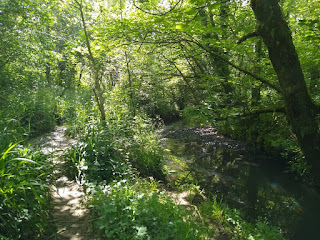 It was fine. There was only one bit I couldn't easily avoid but had to scramble through using my hands for balance. And it was a lovely walk. So peaceful. Just the stream burbling, the birds tweeting, George panting, and me singing the national anthem.

I have a confession: I've never learned the Welsh national anthem properly. I know most of it but get some mixed up and other bits I have to just open my mouth and mime. So when my friend, Gareth, put up a mini 'Learn the Welsh anthem' course I decided the time was right.

I struggled. I said to Gareth, 'It might help if you had the translation up there as well.'

Turns out that didn't help.

The only thing that works is if I picture the written words on the screen. I can just about manage then. If I don't pause, or hesitate, or, worst of all, think.

"It's your hormones" is so vague as to be meaningless. They might as well say it's because Jupiter was aligned with Venus last Wednesday. Which hormones exactly? And in what relative quantities? And how exactly do they affect your weight? Facebook is Twaddle Central.

I've got my Facebook pretty tightly controlled and don't get many targeted ads. (I still get tons of sponsored content. It just is more generic.)

Oh you have to pay to find that out, Nick.

Mine seems to vary, Kathy. I can go for a while with none and then get inundated.

Not thinking is the KEY to speaking another language fluently. Seriously. But it's hard to stop thinking about how to say something though, isn't it?

I had never heard the Welsh anthem. A beauty for certain. Good luck with it.

I love the Welsh National anthem, and the fervor of the crowd who speak Welsh. Lovely.

I like your national anthem, you're in good company, some of the players don't know all of it :-) That walk looks lovely. I have some of those pretty yellow poppies in my garden, I don't know how they got there, probably wind blown or birds.

I have blobby belly and often see click bait that's supposed to provide the magical mystical ways to shrink it. Nothing works since I'm not giving up ice cream, cake, cookies, and so on and so forth. Goodies are my comfort in old age.

Probably not your hormones. Probably someone wanting to fill their wallet. I am, as always, jealous of the lovely places you can walk from the beach to the woods. Sigh.