A day of near misses

Father's Day so we were invited to Daughter's for lunch. She cooked and served up a delicious Jamaican feast: sweetcorn fritters, jerk chicken skewers, dirty fries and roti. Plus reggae rum punch. (Or without rum.) 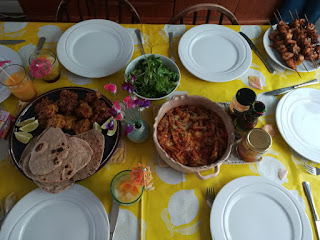 All very yummy. Followed by mint rocky road made by GrandDaughter1. Also yummy. Then after all that food we walked it off across the golf course where who should we come across but Hugh Laurie! 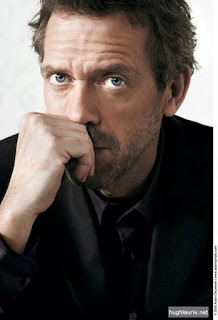 Of course when I say, 'came across,' I meant we saw some filming happening and heard later that Hugh Laurie was directing a murder mystery and was there in person.

What we actually saw was: 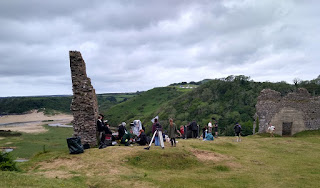 Back home relaxing I deliberately turned on the television for the Wales Italy football game so I could sing along with the national anthem, using my newly acquired knowledge.
But when I turned it on they were just kicking off: I'd missed it. As it's an important game I thought I'd better watch it anyway. Forty-five minutes later and I was remembering why I never watch football. And not just because Wales is losing.

How fun to have a near miss with Hugh Laurie, and the tasty food you describe.

You were sorta kinda in the presence of Hugh Laurie. That's exciting. You seem to have had a good day.

In my area they never show the singing of the National Anthem before televised sporting events...that's just another opportunity for another ad.

Even being near a film or TV shoot is exciting!

It sounds like a great day but for the football. I can’t get into it either.

Sounds like a fun day, we ate out at a restaurant.

I can't watch any sport, it all bores me.

For the life of me I cannot see the connection between patriotism and sports of any kind. BTW: I'm with LL Cool Joe in being bored by watching sports and the only sports I cared to play (as a youngster) were work-up softball and basketball.

Pretty cool to see a film shoot, even at a distance. You watched football for 45 minutes. Wow - impressive. I wouldn't have lasted more 5 minutes!