I remember when you used a public toilet - if you absolutely had no other option - and afterwards turned on the tap - cold water only - to wash your hands - no soap - before drying them on a usually dirty pull-down towel thing.

How things have changed.

These days most hand-washing facilities are at least partly automated - although these are the worst ones. Hand dryers have long been automated and now lots of taps are, but who hasn't stood for ages with your hands under a soap dispenser waiting for it to proffer its goods before realising you have to press something first?

But I have to say peage service stations in France are up there with the best. (I'm even finally coming around to the idea of no toilet seats.)

Here's my round-up of the best on offer - even if you need a plumbing degree to work them. 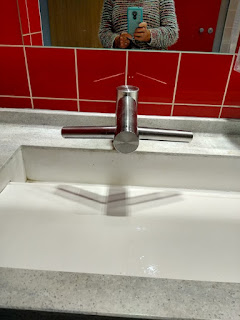 Now you'd see this tap and you'd think, "Those sticky out bits must be the taps." And you'd try and fail to get any water out of them but because you're vaguely waving your hands around the water begins to flow anyway from the main body of the thing.
Soap is in a separate dispenser - automatic. That's simple. But where do I dry my hands? I notice that the tap is made by Dyson famous for carpet cleaners and hand driers so . . . wave my hands around again under the sticky out bits and dah dah!
(Okay I admit there was a notice by the mirror with little diagrams that might have helped me a bit!)
But top of my toilet charts comes this beauty! 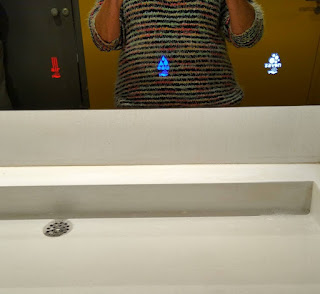 Lit-up words and pictures to tell you exactly where to put your hands! While I would have put them in a different order - water, soap, dryer - it was clear, well, apart from the white soap which I thought first of all would be air. But that's just me.
Now if I could remember exactly which services these were in it would probably be more helpful. But speaking of services, if travelling through France, do try to choose one with a Paul bakery franchise. Top notch goodies.
* * * * * *
I think I've just about finished all our holiday washing. While sorting out the dark pile I noticed most of the clothes in it were Husband's and not just black and shades of grey but dreary and well-used. I concluded he needs the Queer Eye treatment.
As far as I know the team hasn't come to Wales yet so I may have to take Husband shopping by myself. Or possibly with Daughter and Daughter-in-law as well.
* * * * * *
In other 'shopping' news.
Husband says we're definitely not getting another dog, although if we do it won't be a retriever as we're too old.
My starting position is, "We're getting another retriever."
It's not going to happen yet but we shall see.

I'm sure I left a comment on this post? Perhaps I'm getting senile. Hmmmm, a distinct possibility.