Normally we try to have a serial or series on the go but we seem to have run out of ones we both want to watch. (I've since remembered that we still have the final series of The Bridge to re-watch. Excellent.)

First up was Look Up Now - no, I've checked, it's Don't Look Up. I think I keep getting confused with Don't Look Now.

I thought it would be funnier than it was and found myself worrying at the prospect of the world ending. Especially if you can actually watch the progress of a comet as it heads towards your destruction. What would you do if you knew it was the last day for earth? For me I think I would want to be with family, and tell them all the things I'm not sure if I've told them enough, like how much I love them and how wonderful they are. And that God loves them even more.

Next, Mr Jones. This was even more terrifying as it was a true story about what was really happening in Ukraine while Stalin was boasting about how amazing the new USSR was. Politicians being politicians while people died on the streets.

Finally the gory The Harder They Fall. Another one I thought would be funnier. Great soundtrack. I'm not sure if it's my ears or whether people mumble more in films these days but I spent a lot of the film guessing what was going on from the phrases I could grasp. Got better in the second half with an intriguing end.

This morning I allowed myself to finish my jigsaw. I say 'finish'; there are four edge pieces missing! 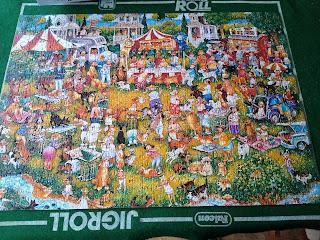 It's the first time I've had a charity shop jigsaw with missing pieces so I suppose that's a pretty good record. It was quite a difficult puzzle as the lines weren't clearly defined and I struggled to differentiate between dog and person bits.
I've just discovered today is National Puzzle Day so I think that calls for a new jigsaw to be started, and some interesting facts.
National Puzzle Day was created in 2002 and celebrates puzzles of all sorts, and the fact that they help stimulate our brain cells and keep them active.
The first jigsaw puzzle was created by map engraver, John Spilsbury, in 1762. He mounted one of his maps on wood and then cut out countries to help children learn geography. At first they were called dissected puzzles. They weren't named jigsaws until the tool - which was used to cut out pieces - was invented in the 1880s.
And if you see the word 'puzzle' written down a lot in a short article it starts to look very weird. (That's a Liz original fact.)
* * * * * *
I'm also considering popping into Mumbles to get an M&S Meal Deal. They usually do something like one main, one side, a pudding and a drink, and sometimes the bottle of wine alone makes it a good deal. I haven't bought one for a while though so they might have changed it. All the courses serve two and I usually do an extra veg too.
I have been thinking about this all week. When one spends a week craving a £12 M&S Meal Deal, one needs to get out more I think.
Posted by Liz Hinds at 1:51 pm

Amazing the things that get important when you're at home a lot. Maybe I should finally start a jigsaw puzzle today. I intended to do this in January, but it hasn't happened yet.

I bought my sister-in-law a puzzle for xmas. She finished it and called to say it was difficult because of the multitude of small things in the picture and that 2 pieces were missing all together and there were 5 extra pieces that didn't go to that puzzle at all. So, I'd say this being the first 2nd-hand puzzle with missing pieces is a good thing.

What a jam-packed, busy puzzle that is! Congrats on finishing it. I don't have the patience to do jigsaw puzzles, but My Rare One loves them.

I kept thinking that movie was called "Look Up" because the "Don't" in the picture looked different from the rest of it, LOL. I agree, it was all too realistic to be that funny but it was definitely a good movie!

I thought the" The Harder They Fall" you were referring to was an old Humphrey Bogart movie about an exploited South American boxer from the 1950s! Didn't know they came out with a new movie in 2021 with the same name and absolutely no relation to the old one.