It's very strange that, as someone who hates cleaning, I enjoy polishing Uncle's silver tray. I suppose it's satisfying because the change is so obvious - because obviously I don't do it more than once a year. Unlike my gran who regularly spent a whole morning polishing her brass collection. She would be ashamed of me.

Weather today is bad, and forecast to remain so for the whole day. So, with no excuses to lure me away outside I decided to be dynamic - my favourite word of promise - and get cleaning. Bathroom is done and dining-room is halfway done.

The dining-room has been untouched since last February. No, not last February, the February before. I know, shocking, isn't it?

My excuse is that was when the hall decorating started and everything that could be moved out of the hall was transplanted into the dining-room. Which then became a dumping ground for any and everything.

The hall isn't finished yet but the furniture and knickknacks have been moved back so really I had no excuse not to tidy and clean. Ah, but I did. There was my jigsaw.

Do you remember? The jigsaw I was finding really hard? The one I began at Christmas and that was spread out on the dining-room table? The one I really didn't want to give up on. 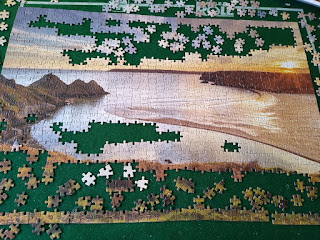 I've given up. I am packing it up and sending it to a friend who likes this sort of jigsaw. I prefer the ones with lots of intricate little details that you have to place rather than the 'try this piece and see' ones. And I know I've done a lot of it, albeit the comparatively easy parts, and, yes, it does seem a shame to stop, but sometimes you have to know when giving up is the right option.
Now I think we need to have a party. Amongst the drinks remaining from Uncle's collection are these beauties: 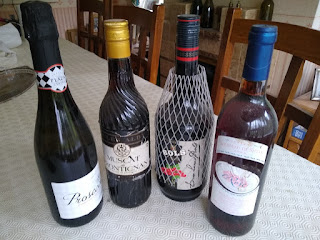 Prosecco, Muscat, redcurrant liqueur, and rose wine. There was a bottle of pastis too but I persuaded Husband to bin that on the grounds that we don't know anybody who likes it. I dread to think how old these bottles are but, hey, it's alcohol, and alcohol doesn't go off, does it? So party anyone?
* * * * * * *
Just an after-thought. Results from the Senedd, council, and other elections are coming in thick and fast now. Incredibly depressing that the Tories have made gains - fortunately not too many in Wales. The fact that everybody knows Boris Johnson lies and cronyism is rife seems to matter not a jot.
And the fact that our Prime Minister just happened to see the need to send gunships into the English Channel to see off the Frenchies, just one day before the elections, could be a coincidence. Or could possibly be extending the hand of loyalty to the ex-Brexiteers who might have been wondering way to vote.
Posted by Liz Hinds at 1:30 pm

Life's too short to waste it finishing a hopeless jigsaw puzzle. I just saw an item on our newscast the other day about the Welsh election and how 16 year olds and up are now able to vote for the first time! This reform gets talked about from time to time here in Canada too but so far nothing has ever come of it.

PipeTobacco, rosay yes. There should be an accent on the e but I don't know how to do that! I suppose it's a halfway between red and white wine. I don't drink at all so don't really know.

Yet it hasn't made a huge difference to the results, Debra. One would have thought - hoped - that young people would be more left wing.

I do jigsaws regularly but that one would bore me, too much sky and sea.

I do not understand why Boris Johnson is so popular, even my hairdresser loves him. I think people like him because he gets things done, the problem is I don't like any of things he's doing, apart from the vaccination roll out.