Maybe it's my mood but I don't feel as delighted as I would do usually.

It was a tense game as well as a controversial one: two of Wales' tries in the first half were questionable. The referee and the TMO (the man in the box who watches it all on the screen and replays bits over and over) were content and you have to play by the referee. And even taking away the dubious scores Wales still won - although whether that would have been the case without said dubious scores ever happening is another matter.

Because Wales has now beaten England, Ireland and Scotland, the home nations, we get the Triple Crown, so should definitely be celebrating but, on the whole, they were not convincing performances. That said Wales is getting better and the young players coming through look exciting so there is reason to be pleased.

Come on, woman, shake a leg, pull yourself up. The sun is shining and all is well with the world - this little corner of it in my back yard anyway. 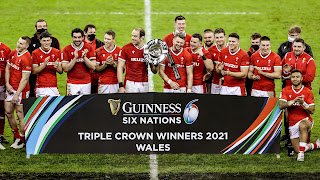 It must have been fun to watch the home team win! I hope you feel better soon, Liz.

Did you and your husband have a bet on the game? He should at least have to make you a celebratory dinner now to mark Wales' victory!

I hope so too, CopCar. A lovely walk did help today.

Well, he did cook the beans on toast, Debra.

Hope you're feeling better now after a walk and tea :-)