The trouble with the sun shining so relentlessly is that I feel obliged to lie out in it. As we don't get much sunshine it's seems only proper to take advantage of it when we do. It does mean that the house is in an even bigger mess than usual but, hey, it'll probably rain soon. Plenty of time for cleaning when it does. 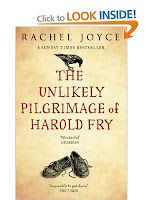 So sitting in the sun I get through books quite quickly. I've finished The Unlikely Pilgrimage of Harold Fry. It's well-written, I enjoyed it and it's a bit different. I think it gets 3.5 stars, no, maybe 4. It tells the story of a retired gentleman - in the truest sense of the word - who decides, on the spur of the moment, to walk from the south west of England to the north east.

The author refers to real places en route and two of them I am very familiar with as Daughter lives near them. One is Bickleigh Mill, an old water-mill that has been converted into a shop and restaurant/cafe. The shop is one of those that sells all those lovely things you'd love but don't need and therefore can't justify spending (lots of) money on. Except fudge. They sell a really delicious locally-made fudge. I bought some once when I was driving, on my own, back from Devon to Swansea, thinking it would last me the journey: I wasn't even out of Devon before it was gone.

We've lunched in the restaurant a couple of times and it's been delicious but I was disappointed last week with my millionaire's shortbread, although as Husband said, shop-bought is always a disappointment. They never seem to be able to get the right thickness and crispiness of biscuit base. Lynn, a friend from church, makes the best I've ever tasted. She gave me the recipe but I don't think mine came out as well - although it's always better if someone else cooks for you simply because you didn't have to do it. 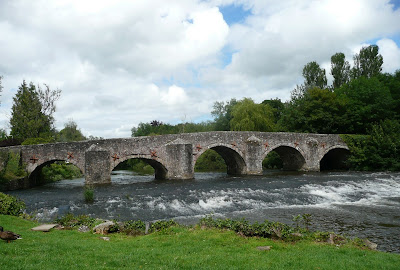 Just across the river from the mill is The Fisherman's Cot, which is also mentioned in the book. Again we've eaten some good meals there. (Do you notice a theme emerging here?) The author says that, apparently, the bridge outside the pub is the one that inspired Simon and Garfunkel's song, Bridge over Troubled Water. I have a vague inkling I've heard that story before but I probably heard it from the same source as the author so it's not necessarily reliable. Indeed, according to different sites the inspiration came from a gospel song, which sounds altogether more likely. But it's a pleasing story. The river wasn't very high nor raging too fast when I took this photo from outside the pub.

I've also started A Cottage by the Sea, an average easy-read girly book. Although the author is less specific about the location the heroine does say that they visit St. David's where, according to her, the cathedral stands proudly on top of a hill and they have to go up steep steps to get to it. Fine except the cathedral nestles in a dip and you go down steps to it. Presumably the author hasn't been there but if you're going to write about a real place you need to do your research thoroughly. It doesn't matter in this book, it has no relevance to the plot, but it is just wrong.

That's it. I will clean when it rains.

It's only sensible, katney.

Lie out in it or go for a walk in it.

We've stayed at The Fisherman's Cot, Liz, my sister used to live in a thatched cottage in Silverton, nearby....I remember the bridge over the fast flowing river...Di.x

I think I've seen this book promoted on Amazon and thought it sounded interesting. I always enjoy a book more when I recognize some of the landmarks used in the setting--how neat that you have visited some of these places!

Liz, you commented on my last post that "The Supremes at Earl's All-You-Can-Eat" sounded like your kind of book. Actually, I thought of you when I was writing that review--I really think you would love it! Some reviewers compared it to "The Help," and I thought about including that in my review, but I think it's a misleading comparison. "The Supremes" isn't about social injustice or some such theme, for the most part, just about the ups and downs of everyday life and the friendships that can sustain a person. Anyway, I hope you like it!

the only sensible actions, james.

Silverton is where Daughter lives, di!

I shall definitely have to get it then, rose! I checked in the library but they don't have it. I suppose I could order it from them. Or just buy it!