Didn't read as much as on a beach holiday but still managed to fit in a few.

One More Croissant for the Road
by Felicity Cloake
3.5 *
A food writer takes a tour of French food locations on her bike. I thought this would be appropriate reading as we began our journey driving through France. I did enjoy it but haven't finished it yet. Apart from the interesting bits about the food or recipes themselves it got a bit monotonous with the author complaining about getting wet and  the problems of cycling long distances up hills.  I suppose there's not a lot else you can say. She did institute a system of marking croissants that I tried to use but then didn't eat many except for a rather delicious pear one (on the left) in an Italian café. 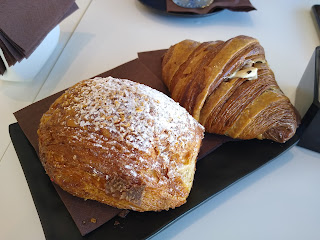 I also discovered - though I don't have a photo which is odd - the French delight of a palmier. But I'm getting distracted.
And that's when it fell off in my hand
by Louise Rennison
DNF
I picked this up in a charity shop as a possibility for GrandDaughter1 but thought I'd better read it first. Took me all of two pages to decide it was inappropriate.
Shining Through
by Susan Isaacs
5*
Recommended and loaned to me by Vivien, my old school friend. Very entertaining and unusual. Described on the back as being, "As close to a 1940s movie as a book can get." A 'can't put it down' sort of book although I did get annoyed with the heroine in places.
The Man Who Died Twice
by Richard Osman
4*
The sequel to his best-selling Thursday Murder Club debut and featuring the same characters. All a bit over the top and unlikely but highly entertaining and better, I think, than the first one.
On the journey home I read on my kindle - I can manage that in the car I think because I don't have to move my head/eyes so much as I would when reading a book, which makes me car-sick. Or maybe I've just grown out of being car-sick.

Murders at the Winterbottom Women's Institute
by Gina Kirkham
3*
An easy read, some nice characters, and a typical amateur sleuth type plot but the way the police investigated seemed hopelessly unrealistic so I was surprised to read in the bit about the author at the end that she'd worked in the force for some time. Also, and maybe I'm getting old and prudish, the heroine and her best friend, two women in their 30s/40s, seemed obsessed with sex and every comment contained a sexual innuendo. Am I out of touch? Is that what women in their 40s are like these days? The women I know aren't.
I whizzed through it on the journey home in between colour by numbers, a quiz book, and dozing. It passed the time.

I like a nice palmier every once in a while, not to mention a croissant, and I love sexual innuendo! I don't know what any of those facts may say about me.

When Chippendales, male strip act, were a thing,back in the 80s, I think, women in their forties were the most out of control audience. Or so I'm told.

I now have the Osman book on my Kindle, thank you.

We all like a bit of sexual innuendo - did you get Round the Horne on the radio back in the 50s/60s? - , Debra, but every comment?

I hope you enjoy the book, Boud. I think we have similar tastes in fiction.

Sexual innuendo can be fun. I engage in it a bit on my blog and on Facebook, but my friends and I usually have other things to talk about.

All in all it sounds like you had a lovely trip.