As I said, Wales were very much the under-dogs yesterday, playing the World Champions and never having won a game against South Africa in South Africa. So when they went in at half time 18-3 in the lead it was a surprise to say the least!

With ten minutes to go Wales were still in front then South Africa scored and they were drawing. Coming away with a draw would still have been a triumph.

Thirty seconds to go, Wales had the ball. All they had to do was hang on to it for thirty seconds! So what did they do?

Kicked it to South Africa who went on to score and win.

These are the kind of moments that secret Malteser stashes are made for. 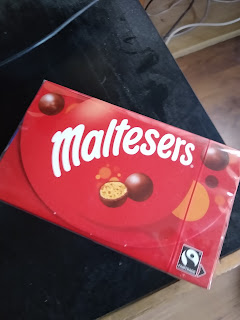 Snatched defeat from the jaws of victory, as the old saying goes.

I believe our US equivalent to “Maltesers” are what we call “Whoppers”. I would agree that they ARE an important candy in such situations!!!