When my mouth says yes

Yesterday Sean messaged me and asked if I wanted to do the bit about creative prayer in Zac's bible study tonight. (I'd previously offered to do it 'at some time'.)

Unusually for me, I did have a quick think before saying yes but I had all the ideas written down so it was just a case of pulling it all together. So I said, 'Yes.'

Hence today - because all my creative ideas involve stones - you would have found me collecting stones from a wet and windy beach. Actually the collecting wasn't the bad bit: carting them back to the car was. Especially the really big but very pretty one. 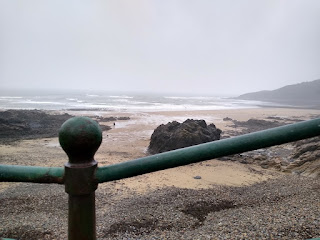 I warned Husband before I went beach-combing that the Sainsburys delivery would be some time between 12 and 4. 'Okay,' he said.
When I got back the delivery man had been and gone again. Husband hadn't heard him as he'd been playing a computer game, with his headphones on.
When I grumbled he pointed out that I'd had another email saying the delivery would be between 12 and 1 so it was partly my fault.
I'm still trying to work out how.
I'm also still hoping that the delivery will turn up again in the next thirty minutes.

Those rocks -- a new way of getting stoned?

Okay - you know carrying rocks of any size counts as "strength-building" exercise. Bonus!