I need a tattoo 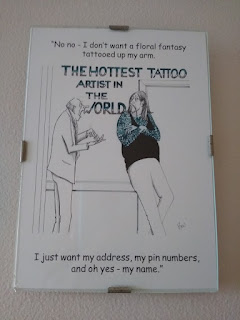 We finally took a load of stuff to the charity shop today. The assistant wanted to know what was in all the boxes and bags. 'Knick knacks, kitchen pans, a few books, maybe some clothes.'

She still insisted on opening and peering in every box. Perhaps she thought we looked the sort to try and dispose of a body this way.

Then after dropping food off at Zac's I popped into big Sainsburys for the first time for ages. I was quite calm until it came to paying. The machine refused my attempt at contactless so I had to insert my card and enter my PIN. And therein lies the cause of the panic.

What on earth is my pin? My mind went completely blank. I didn't have any cash on me and I was getting flustered. Then, out of my panicking came a number - and it was the right one.

I'm coming to believe a tattoo is the only answer.

I'm doing a lot of groaning today. Usually after exercising after a break it takes two days for the aches to emerge. It is not a good sign that my thighs are in agony already.

In bible study we read the bit in Romans where Paul says about obeying those in authority over you, and we talked about being more proactive. Today the opportunity arose.

It was mentioned on FaceBook that during a service to honour nurses, Boris Johnson read a passage from Matthew's gospel. This passage:

In our country today there are more food and clothes banks than ever before, immigrants, at least those who have been allowed to stay, regularly suffer racial abuse, the NHS is stretched and its nurses over-worked and underpaid, while prisons suffer from over-crowding, lack of staff, and cutbacks in rehabilitation services. If there was ever anyone less fitted to declare such words than our prime minister I can't think of him.

So, inspired by Tuesday evening's encouragement, I wrote to the PM. A proper letter on paper, not just an email. Are you impressed? I am impressed. I also copied it to my Labour MP and suggested members of the opposition might like to challenge the PM on those words.

I really hope it was a deliberate ploy by the nurses' organisation to give him that passage to read.

Can't remember your pin number? Aches and pains? Sending cranky letters to the PM? What are you, a Boomer? LOL, me too.

You can have the necessary info on a bracelet. It's less permanent.

Well done Liz. I woke up early the other morni g and joined Liberty a group of people who are standing up for social justice. I must of been in tune with you all at Zacs.
Ps I remember my number by shape. Will explain when I see you in person ha ha