It was a weekend of firsts for me ranging from the sublime to the cor blimey: writing the bible to being a chorus girl in prison.
On Saturday the Methodist church in Mumbles was inviting volunteers to take part in a nationwide initiative, part of the 400th anniversary of the King James bible celebrations, to hand-write the bible. Different Methodist churches throughout the UK were allocated certain chapters and when it's finished they'll all be collected together and bound for perpetuity.
I was in Mumbles and I saw the poster outside so went in and wrote a verse (Matthew 13:54 since you asked).
I think it's a lovely idea but, strangely, one of the organisers told me that some members of that church, regular attendees, hadn't been keen to take part. Daughter and Son-in-law who were down for the weekend also did their bit. 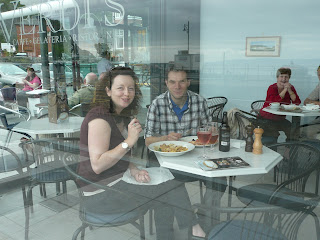 They had just been to enjoy lunch at Verdi's while I walked from home to Verdi's and back to Oystermouth village to meet them at Great-auntie Joan's - pushing GrandDaughter of course. (Just about as far as you can see in this photo taken from Oystermouth. Notice the remains of old wrecks in the mud.) 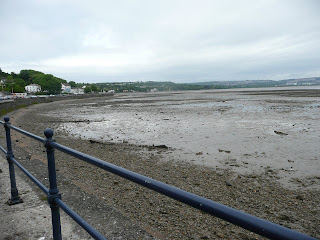 By the time I reached Verdi's I felt I deserved an apple crumble and praline pecan cone because not only had I pushed a pushchair a good distance I also felt disenchanted with people.
There were lots of walkers on the promenade but you try getting a smile out of them let alone a good morning. After I'd been ignored for the umpteenth time I decided the way to go about it was to start smiling - actually I wander along smiling to myself which could be the reason I get ignored ... - well before I reached them and then to say loudly, 'good morning.'
This method did seem to get a slightly better response but some people still deliberately turned away from me. Really, I think, why be out if you're going to be so miserable? Of course they didn't have the delight of having Granddaughter who is enough to make me smile constantly.
These rather cool scooters - 'Lambretta SX,' Husband said instantly on seeing the photo - were parked outside Verdi's and attracted a lot of attention. Husband was a Mod back in the days before I knew him and, according to the legend on the side of the Union Jack scooter, once a mod always a mod. I spotted the drivers and, judging by their style of dress, I have to say that I don't think that saying is necessarily true. 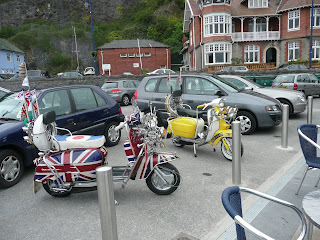 As for being a chorus girl in prison, well, maybe backing singer would be more apt - although if you've ever heard me sing, you may think backing squawker is more like it.
We were taking the service in prison this morning. The prison is currently undergoing some sort of audit so they're being very rule-conscious and we all had to be searched. When the warder patted my bottom she felt a strange lump. Warily she stuck her hand in my pocket - and pulled out two dirty tissues. What did she expect?
Ric was our musician and as an ex-professional we gave him a solo to do. Except he decided to sing Things. People my age will remember the Bobby Darin version; younger generation may associate it with Robbie Williams. Ric thought it would be a good idea if I and one other sang the Things bits. You know the song: thinking 'bout things - like a walk in the park; things - like a kiss in the dark etc. I was prepared for this and I'd planned to rope someone in and practise when we got to prison. However with the search and extra security we were rushed straight into the service so one of the other women - who can actually sing - was hauled up and forced to do it with me. Well, I enjoyed myself. And I think the men enjoyed it too. They certainly laughed a lot ...
And it did relate to what we were saying ... sort of.
Posted by Liz Hinds at 7:27 pm