We've just come back from the pub. How decadent I hear you thinking, going to the pub on a Saturday afternoon. But we had to go. Because money-grabbing England RFU sold their home game rights to Sky and we don't have Sky. I am surprised though at the number of people in the pub on a Saturday afternoon. I was going to say 'women' but that's sexist, even if I am thinking it. Don't they have anything better to do?

So rugby, yes. I tell you it's not often you'll hear the words, 'Come on, England!' in a Welsh pub. England lost, 28-14, mainly because Australia had a very good defence but England played the more exciting rugby. Husband wasn't expecting them to win so he wasn't unduly disappointed. But Danny Cipriani has a long way to go to replace lovely Johnny.
Last night I had to go to a play-reading. I call it that but it was far more shambolic than that sounds. I told you I'd submitted my play for the Play-offs (a monthly evening in the Dylan Thomas Theatre when local writers get the chance to have their work read in front of an audience, with the winners going on to a final) and the person in charge (a very loose description) told me to go along last night. So my play was cast and will be performed/read in the Play-offs on 11th February.
I think I will be able to have a say in directing although I could turn out to be the Gordon Ramsey of the profession. 'Call that acting? My effing cat could do better!'
The trouble is my play is so clear in my head that I know exactly how I want it done. And that might not be the 'right' way. I will be very precious about it I fear. See, I am already gathering my excuses for when my play doesn't win!
But it's about a Welsh family and involves rugby. The very fact that the actors were there last night - rather than watching Wales play Canada - and going on to the pub afterwards - rather than going home to watch the videoed game - suggests to me that they don't get rugby and won't grasp the passion it arouses. As one of them said, 'Is there a rugby game tonight?' 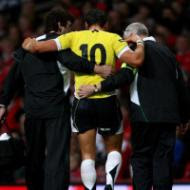 So, yes, I hurried home and we watched the game. It was a lacklustre performance from what was effectively a Wales second side. I didn't recognise many of them and that added to the fact that they were wearing yellow (YELLOW?!!!) jerseys meant that we spent the first 5 minutes cheering on the wrong side. Still we got the right result and next Saturday we go to the Millennium Stadium to see Wales take on the New Zealand All Blacks. Ooooh, I'm excited already!
Posted by Liz Hinds at 4:55 pm

I got to see the outside of the Millenium Center as well as just inside where there's a gift shop, etc. But we couldn't go right in as there was nothing going on and of course we'd have had to pay. But I'm envious you're going to see the game! Maybe something will be happening when Cathy & I get over there.
Go Wales!

We watched most of the rugby matches on SKY and BBC yesterday - goggle-eyed at the end. England were dreadful. I hoped the match between the All Blacks and Ireland would be better -but it was just as bad!

Good luck with your play.

Wales wil indeed have to go some to beat the All Blacks, leslie.