Having just squeezed past George to get to my desk I am reminded of the words of the dog trainer that I took Harvey to when he was a puppy.

Imagine these words with a slight German accent. 'Never step over and walk around a dog. If he is in your way make him move. You must show him who is boss.'

How can I disturb him when he's dozing and comfy? Poor little thing.

You can read the full story of the nightmare that was dog training classes here.

Anyway, I went to the woods with Nuora and the grandchildren yesterday. Younger Son was leading a stool-making workshop and cooking pizza. (We went in time for the pizza.) 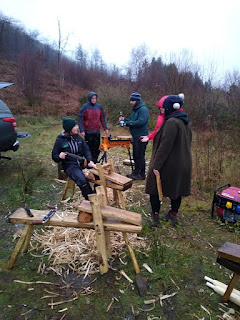 But when we arrived it was pouring with rain and he had decided to skip the pizza so people could finish their stools and get home. GrandSon4, however, was determined to show me the fairy doors so off he and I set through the mud and very wet rain.

He had only been there once before but he knew exactly where to go. 'Not that way. No fairy doors that way.' And he was right. 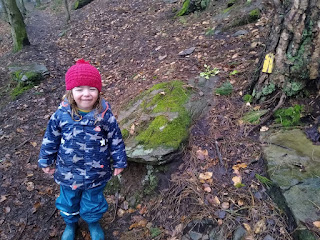 Those fairy doors obviously made a big impression on him!

And just on the dog training point -- that's why the worst thing people can do is let their dogs sleep on the bed with them. It makes the dog think they're in charge, not the human. Once a dog thinks it's the boss, they'll never obey you again.

I can't understand why anyone would want a dog - smelly, hairy, muddy - to sleep on the bed with them.

There are a couple of "fairy doors" hidden in the roots of oaks in a local forest.
Opening them showed that they were put there by geocachers to hide their caches.
Quite romantic, really. They painted them very prettily :-)

What did you mean by "fairy doors"?

Don’t you love being guided by a young child? Precious times!

I think in this case they're just doors stuck on the tree trunks, Stu, not hiding geocaches.

And may he always know where to find them…...

oh I love the fairy door, what a lovely idea. I would step over our dogs! sometimes they have to move. Rufus is like Harvey was, he has to rush at everyone, then rush round them, barking and wagging his tail. Most people I meet know him by now and brace themselves!! He just wants to play all the time, he calms down after about 30 seconds. My two don't even go upstairs, I wouldn't want them on my bed!

To be young and believe in fairy doors. When does that go away?

My Granddaughter takes my hand and says "Come on JoeJoe let's go and play". It warms my heart. Not that we've looked for any fairy doors yet.

There's a tree in a neighbouring road that has been provided with not only a fairy door but several fairy windows. But I haven't seen the fairy yet. Maybe she's a bit reclusive.

I hope so, Sonata.

Next time you're out then, Joe!

She won't come out when you're around, Nick! That would be silly: she doesn't know if you're friendly or if you'd try and capture her and put her in a cage.