At times during the last few weeks I even dared to hope Labour might win. Realistically I expected them to lose but that it would be close. So when the exit polls last night forecast a huge majority for the Conservatives I didn't believe it.

How accurate can a nationwide poll of 20,000 people be? I consoled myself with the answer, 'not very.' How wrong I was.

I woke about 3.30 and couldn't get back to sleep properly. Husband was coughing, the vent in the bathroom was banging in the wind, and my mind was tossing. I got up eventually at 5 just as
Denis Skinner, a trouble-making Labour MP who'd held his seat forever, lost it, taking the Conservative total into the number for an outright majority.

Apparently it was mostly about Brexit - get Brexit done, the Tories' catchphrase - and not liking the Labour leader, Corbyn.

The most hopeful thing I can take from it is the idea, that one of the political analysts suggested, that Boris Johnson will now be secure enough to take a more central stance in order to unite the country. He's going to have to do something with the Scottish Nationalist Party winning Scotland, opposing Brexit, and wanting independence. 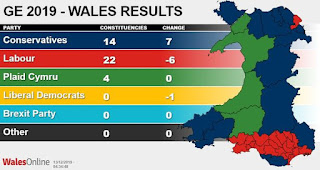 And you voted for that Marxist, Corbyn? Loser! Loser!

I will be interested to see how Brexit works out. It’s been a long time coming.

It will be even more interesting to see the resolution of the situations with Northern Ireland and Wales. Good luck!
Cop Car

The analysis being made over here is that people are just so sick of the never-ending uncertainty about when or if Brexit will occur, that they just voted for the party that will end that uncertainty (even if Brexit is not the outcome they want). Sort of like "just get it over with!"

And proud of the man, Stu.
We will all be interested, Marie, to see how Brexit works out.

Maybe they'll build a wall down the middle of the Irish sea, CopCar.

I think that's the general feeling, Debra. For those of us who don't want Brexit it's been a painful few years and not likely to improve.

Hello from Idaho and stop in from 'She Who Seeks" yes it sad that the conservaties are gaining or it seems that way.
If you have time stop in for a cup of coffee

In many ways it feels we are (on both sides of the Atlantic) in alternative universes.... which we had never been a part of previously, and we do not fit into now. It feels like we are in a very nebulous and scary world these days.

Liz--About that wall in the Irish sea: Would you like for me to bop down to Mexico to see if someone down there wants to pay for it?
Cop Car
P.S. I obviously had experienced a brain lapse when I input "Wales" instead of "Scotland" in my first comment. Perhaps I was thinking of you!

PipeTobacco, I suppose all we can do is battle on. The tide WILL change one day.

What a great idea, Cop Car! I'm sure the Mexicans would be happier paying for our wall than theirs! Then again Johnson and Trump are such good friends maybe Donald will pay for ours.

Liz--Just don't fall for it if he tells you that the check is in the mail.