A masterclass in How Not to Do a Book Launch

I spend years writing and producing my book, planning and organising the promotion and the book launch, and for what?
To have the whole event hijacked by George, the undoubted star of the show.
In case you don't have time or inclination to watch the whole thing, here's his bit.
Posted by Liz Hinds at 1:42 pm 5 comments:

The one with the Book Launch

Here's my book launch! Total chaos! My attempt to go live faltered at the first hurdle as I had it set to 'Only you can view it' instead of Public. Hey ho. Fortunately my children messaged me on whatsapp to alert me so I was able to correct it and start again.

And then of course, the phone rang, the postman came, and George returned from his walk very thirsty - his drinking bowl is in my study. Great book launch!!

Actually once it all started to go wrong I relaxed much more and was able to just go with the flow.

Anyway here it is, about 18 minutes of it.

Anyone got a drill?

For the last twenty-five years or so I have bought Daughter a suitably messaged Thorntons chocolate heart for her birthday like this one: 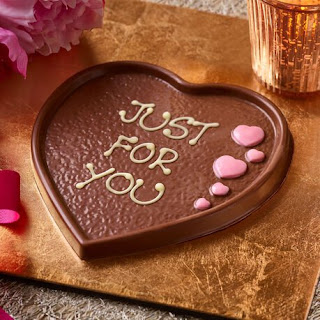 A few years ago GrandDaughter1 decided she wanted the same on her birthday (today). So, on Thursday, I went into town early enough to call in to the shop before my hairdressing appointment. Only to find it had closed down!

After a quick 'Oh no,' I pulled myself together. 'How hard can it be to make one myself?'

The answer is it's not hard. The icing might not be so neat, and the decoration was whatever I could find in my pantry, but the chocolate's thicker. So thick I am thinking that perhaps I should have included a pickaxe in with her birthday presents. 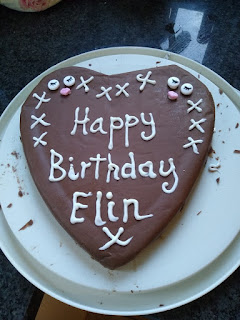 So yesterday we met up with Daughter, Younger Son and families for ice cream and fun on the beach, as a pre-birthday celebration.

At that moment Daughter, who was a little way behind us, yelps, 'Where's Cadel?'

It wasn't a problem. I knew where they were.

Then on the beach I encouraged Cadel to climb a big rock. 'Go on, you can do it, but don't let your mum and dad see you.'

'Mummy and Daddy wouldn't let him climb that,' says Granddaughter1.

'That's why I said don't let your mum and dad see!'

It was a perfectly safe rock.

This is why children need grandparents.

P.S. I used their names here because the sentence would have been too complicated otherwise. I don't usually use their names because if you're like me you won't remember who anybody is and giving them a title/description is more helpful.

P.P.S. The parents did see him up the rock so I am probably in bad books.

Is it just me who struggles with signs? I was in town for the first time yesterday and my brain was in turmoil. 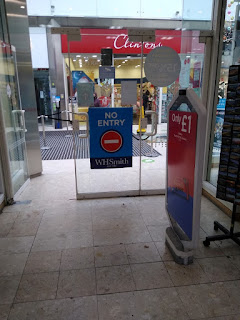 I know this one means I can't go out that way but I had to stand and think for a bit.

Does it mean I can't enter this way?

Does it mean that particular door?

Can I enter/exit through the open door next to it?

This was one of the clearer signs too.

I was walking around the shopping centre and dutifully following arrows on the floor - until I got to the point where all the arrows were leading me away from where I wanted to go. I suppose it would have led me back eventually but - and whisper this because I still feel guilty - I went against the arrow!

But at least I tried unlike some of the idiots around!

For most of the time this is a fairly boring plant but it comes into its own once a year. 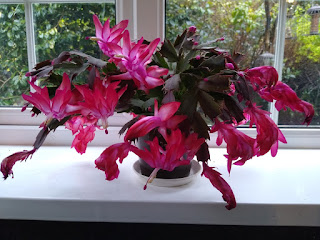 And remember that acorn I planted? It worked out which way was up! 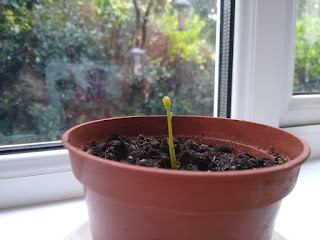 Woke up in the middle of the night with a weird pain in my chest. Of course I was convinced I was dying but I went to exercise class this morning and I'm still here so it was probably that extra large piece of corned beef pie I had for dinner last night coming back to haunt me.

Or the thought of all the money I'm spending on Christmas presents.

I've been in a flurry of purchasing recently. Very unlike me to get organised this long before Christmas but the way it's going I may even have finished my Christmas shopping by the end of November. That will make me very happy.

As I said previously I had hoped to shop locally but I'm afraid I haven't done very well at that. A couple of things (smelly stuff) I ordered from a Welsh artisan company arrived yesterday. They are a lot smaller than I expected. The trouble is when websites give sizes or weights I bleep past it as it means absolutely nothing to me, hence the unexpectedly small size of the gifts.

But a) it's the thought that counts, and b) size doesn't matter. (And we all know that's not true.)

Had a quick panic after googling signs of heart attack and phoned the doctor. He checked me out and I had an ECG: all fine. Sending me for blood tests to cover all eventualities. It's worth feeling a bit silly for peace of mind. And the doctor said it's always wise to check these things out.

How to speak Klingon without trying

Back in the real world this week and what do you know? I'm battling with technology again.

I'm launching my new novel, This Year Maybe, on Wednesday 25th November, so I thought a live Facebook launch would be the way to go as there are so many restrictions on people meeting. (And actually because I'm better in virtual life.)

I looked it up, How to do a live stream on Facebook. Simple everyone said. So I did a couple of test runs.

In the first one I sound as if I'm speaking Klingon (possibly); in the second I am aware of so many personal flaws that I can't concentrate on what I'm doing. And I'm also not completely sure the first test was actually live live. (As opposed to Welsh live i.e. now in a minute.)

So I need more practice. According to one website I can tell Facebook to show it only to me. Needless to say I can't make that work.

And I have to work out the best time of day to do it. Big sigh.

Writing is so simple compared to everything else.

P.S. Have you signed up for my occasional newsletter yet? At the moment I'm pumping them out at about one a week but after the launch it will calm down and probably be once a month or so. There is a box on the right-hand-side of the blog that will let you sign up or you can just click here.

'Twas my 68th birthday yesterday and I had a lovely day beginning with sausage curry on Wednesday night cooked by Husband to note my last evening as a 67-year-old. Breakfast in bed followed in due course and then, after delivering food to Zac's, we went for a walk around the cliffs.

Should we go without George and make it a long walk? No, George is family and has to be there for my birthday. Fortunately the sun shone for us, not just for the walk but for the picnic on the beach afterwards. 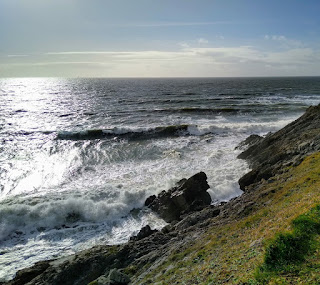 Back home and Daughter and family called in complete with birthday cake, cards and presents. So that I wouldn't blow all over the cake they cut me a piece of cake and stuck a few candles in. 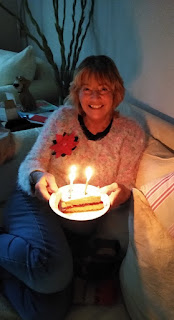 One of the presents from Daughter was this. She said, ' I saw them and thought of you straightaway.' 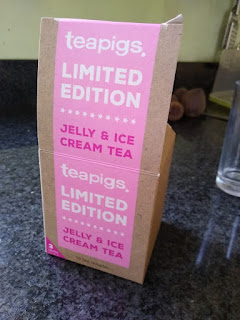 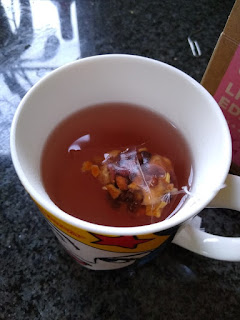 I have just sampled them. They smell lovely but taste less exciting. Maybe I put too much water in the cup or maybe they're just like every other fruit tea bag I've tried and a bit lacking in oomph.

Yesterday evening Husband cooked me a lovely meal and you'd think that would be the end of my birthday but no! Husband is cooking again tonight and tomorrow. I am a lucky woman.

It's GrandDaughter1's birthday soon. I thought I'd like to shop locally so took a trip down to Mumbles. I did buy a book but didn't feel comfortable with people too close and not always masked. I think it is going to be online shopping for the most part this year. Good resolutions for next year maybe when we have a vaccine (I hope) and life is easier.